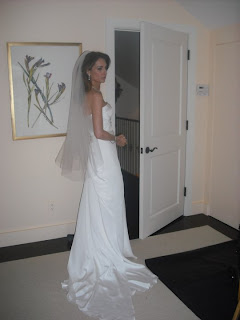 Gina conducted a "grounding ceremony" for me, moments before I got married. In the midst of a fair amount of jitters and pre-wedding issues, she and I went to a separate room where, in minutes, I was gently coaxed into a state of perfect equanimity and readiness for the upcoming ceremony. Gina is a true healer, with an innate ability to intuit and perceive the needs of others. I felt grateful and honored that she was such an important part of my wedding day.
-Heather C-L
Posted by gina zimmerman at 2:44 PM No comments: 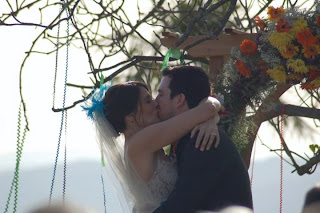 Dorien and Kenny got married atop a hill, overlooking a canyon, facing west towards San Diego.

Dorien and I went to high school together, so it was an honor and a pleasure to officiate her wedding to her beloved Kenny. I had known Kenny over the years, and then, recently, I had been teaching them yoga in a small group so our relationship had deepened in that way.

D and K are one of those couples whose delight in one another is apparent quite from the start. It was simply my job (our task) to give it voice. 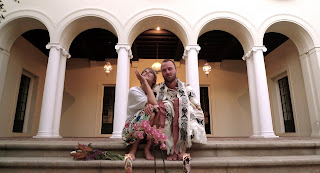 Tommy and Nina came to me late in the game when they realized they wanted to re-envision their ceremony entirely. During our initial phone conversation I was able to get a sense of the general tone they were looking for, as well as a few principal elements. The wedding location itself was a key component, so we decided to meet at the site (a private estate in the Los Feliz hills). We met around the time that the wedding would be taking place, because the light itself was a significant character in the feeling they wanted to create. Immediately, I felt the warmth between them, and the sweetness of the day they were putting together. The ceremony was the crucial missing piece. There was such intimacy and authenticity in every element of their wedding, the ceremony had to align perfectly with their tone and vision. We began our conversation talking about the vows. What does it mean to 'avow' something--what did they truly want to say, both to each other and to themselves, about their deepest intention? After a few minutes, it was clear that we would work together--it was a fit.

It ended up being quite a magical day.
From the bottom of my heart, let me start from the top and say: Gina took us on the shortest notice and spun it into grace. she took all of me in with pure insight. The service began with a guided meditation. I was grounded, and with Gina on my right and Tommy in front of me, I was sure I was in the most perfect space. Gina's sermon was poignant and she listened, illuminating truths that hadn't occurred to me. She saw me for me and anchored our happily-ever-after. I wouldn't have had it any other way. She is so committed to the service she provides. She brings grace, humility, refinement, consideration and dignity.
-Nina M.
Posted by gina zimmerman at 1:39 PM 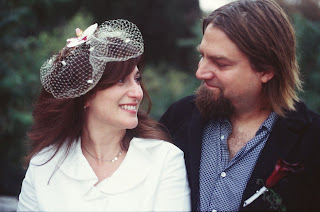 Tamar was my yoga student. She and her beloved George were stumped on what type of wedding was right for them. They knew they wanted ceremony and the sacred ritual of a wedding, but they couldn't imagine going the traditional route with hundreds of their family and friends.
We sat down, and, almost at once, it became clear. The vision of their perfect wedding started to come into view.
As always, it was a pleasure and an honor working with them and helping them to tell their story to eachother and their witnesses.

Trying to put what you did for us in words just doesn’t do justice to the magic, peace and beauty you brought to our wedding... I'm tearing up right now just thinking about it!!!! Thank you for being there for us. I can't imagine anyone who would be more perfect for us.

it was such a beautiful day . Thank you for being such an vital and nurturing part of it. You are a tender, thoughtful guide -Tamar H.

Posted by gina zimmerman at 2:01 PM No comments:

gina zimmerman
los angeles, ca, United States
I started doing weddings in 2008 when my sister and brother-in-law asked me if I would perform their ceremony. I loved the experience so much that I began to wonder how I might continue working as an officiant. As these things go, it turned out that it was already in the works: soon after Karly and Peter’s ceremony, a friend asked me to do hers, and then a client quickly followed suit. In many ways, crafting and performing wedding ceremonies is a natural extension of the work I have been doing for years. As a yoga and meditation teacher, I have learned to articulate subtle instruction and experience in a way that is clear and inspiring. We meet several times, do some writing and then have a final run-through to insure that your ceremony sounds like the ideal reflection of you and your partner on this most important of days.